Big surprise this week was the SILVER PRICE, refusing to drop below 3700c. The GOLD PRICE gained -- choke! -- 5.5%. Stocks did worse than 1.6% implies, dollar stayed flat, and platinum shot up 4.5% and left palladium in the dust.

Yesterday I recounted to y'all that the gold 20 franc coins, favorite of gold-hungry French investors, were carrying huge premiums in Europe ($28 - $35 versus $5 at wholesale here). Last night on the way home I heard a report on National Proletarian Radio that French authorities were warning those casting doubt on the solvency of French banks that they'd better not. French bank stock indices were hit hard this week. Clearly the French, who in my 64-year old memory have undergone at least one currency reform and loads of inflation, are running on the banks and swapping euros for gold. To what degree, I haven't a clue, but a few days ago something else occurred that brought to mind the French proverb, "Nothing is confirmed until officially denied." A couple of rating agencies made showy announcements that French government debt was STILL rated AAA. Right, but who asked you? Unless there's a problem, this resembles an astronomer announcing that the sky is still blue.

Y'all need to face the likelihood that the GOLD PRICE made at least an interim top this week. We will know by the progressive depth of the reaction how far it will carry. If GOLD doesn't break $1,720 (low today at $1,723.95) then it will piddle sideways a few days and take off again, rushing over $1,800.00

The NATURE of gold's situation has changed. In its first wave up from 2001 - 2008, it moved glacially, adding only a tiny bit at a time, struggling to attract investors. It peaked in March 2008, then gave up 30% by November. Then it began the next leg up, and this one moves with much greater speed, violence, and volatility.

The NATURE of the economic situation has changed, calling into question all the old economic verities like "US debt is the lowest risk investment." Sovereign debt around the world is being scrutinized, and investors don't like what they see. The old Keynesian paradigm -- government managing the economy and borrowing and spending its way into prosperity -- is crumbling like the Berlin Wall and that other brand of socialism. Oh, it hasn't fallen off the throne yet, but it's being pushed. The Tea Party, the endemic and insuppressible financial and fiscal crises, the rotten banking structure, debt downgrades, bailouts, all of these are the fevers, chills, and icy sweats of a dying system. Its death is hastening, hastening. Pray that liberty succeeds it, and not a worse tyranny.

In any event, all these forces are pushing gold higher and higher, and in the next three to 10 years you will see prices at levels you would never have dared dream of, let alone mention, in 2001. Shuck out of stocks and dollar denominated investments (CDs, savings accounts, annuities, bonds) and put the proceeds into silver and gold. There's still time.

Yet take not MY word for this argument.  Look at the July break out with a breakaway gap at E1,090 and run to E1,276 yesterday. 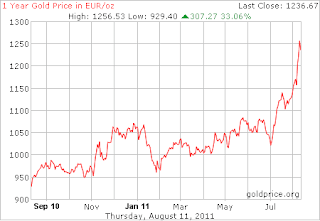 Turn not yet away, gentle readers. Throw up Gold in Yen, and mark and inwardly digest the breakout 1 August above Y127,500, and follow the climb to Y139,580 yesterday. 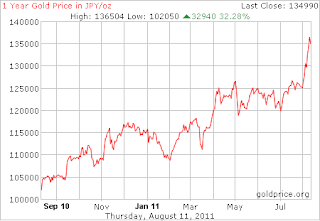 My point? Gold is climbing against every fiat currency. Gold is becoming the premier alternative money. Slowly, slowly the public is repudiating those central bank currencies in favor of gold. This, too will speed up.

Countering that view is silver's uptrend -- yes, Uptrend -- since the June 27 low at 3338c. Of course, after a week of parabolic upward GOLD action, I'd be foolish not to brace myself for a correction. But mercy! of all the gold and silver bulls in the world, I have been kicking against the goads. Silver and gold have consistently outperformed my expectations this year. Market's left me a little punchy, but determined to buy more and more silver and gold on every little dip.

The gold/silver ratio is one fact causing me to look for lower silver. The previous post-May correction high had been 44.584 on 28 June. On 9 August it hit 45.938, which whispers that the ratio will move higher still. Way things are going, that might not be due to silver falling, but to gold blasting away topside, powered by more panic.

I watch. I wait. I am glad that so many of y'all swapped out of silver into gold, because now that move looks very slick. Let's hope it pans out with a higher ratio.

BOTTOM LINE: Long term bull market in silver and gold needs me to defend it like two lionesses need my help with a wildebeest. We may be in for a greater or lesser correction, but the primary trend remains up in a bull market.

Here's what the Dow posted this week: Down 634.76, up 429.92, down 519.83, up 423.37, up 125.71 for a net loss of 175.59. Intraday low for the week was 10,604.70, which fulfilled my target of 10,900 from the head and shoulders and 10,700 from previous trading and lateral support. Wherefore we can guess that stocks will mount a sickly rally from here. They are far below their 200 dma (11,991.67), and could reach that or a little higher. Volatility this week was due certainly to panic in the market generated by US debt downgrade (insubstantial but damaging to psychology) and European sovereign debt crisis. No doubt volatility was supercharged also by the yankee government's Plunge Protection Team.

Be all that as it may, the Dow is doomed to move much, much lower, but not immediately. Close below 10,700 gainsays my cheery optimism and turns the Dow down into the nether regions. If you are one of those laggards who still owns stocks, better seize ANY rally like a seat on the last train out of Moscow in November 1917.

STOCKS -- they are the non-nutritious filler in the Box of Investment Breakfast Cereal.

US DOLLAR INDEX is range trading between 75 and 74.50. Panic spilling over from Europe is sending flight capital into the dollar, and the NGM of all the central banks, who work together like fire ants, are trying to keep the euro (destined for US$1.20) afloat and keep the Yen from rising to the sky. Expect further dollar rally. Break above 75.50 is the first tripwire of a rally, then a close over 76 and 76.75.

Y'all enjoy your weekend.

© 2011, The Moneychanger. May not be republished in any form, including electronically, without our express permission.

To avoid confusion, please remember that the comments above have a very short time horizon. Always invest with the primary trend. Gold's primary trend is up, targeting at least $3,130.00; silver's primary is up targeting 16:1 gold/silver ratio or $195.66; stocks' primary trend is down, targeting Dow under 2,900 and worth only one ounce of gold; US$ or US$-denominated assets, primary trend down; real estate in a bubble, primary trend way down. Whenever I write "Stay out of stocks" readers inevitably ask, "Do you mean precious metals mining stocks, too?" No, I don't.

Be advised and warned: Do NOT use these commentaries to trade futures contracts. I don't intend them for that or write them with that outlook. I write them for long-term investors in physical metals. Take them as entertainment, but not as a timing service for futures.

Posted by Franklin Sanders at 8:10 PM