Glanced over at Platinum and Palladium to see how they're doing. Palladium has been very strong and looks something like silver. Now above all moving averages and inertia is higher. Platinum looks more like gold in the past two weeks (only), and is blocked by $1,850 resistance. If it can clear that, 'twill jump.

So the GOLD PRICE has a range of $1,810 - $1,840, more narrowly $1,820 - $1,840. Market has gone indecisive here, perhaps in the lead-up to the Labor Day holiday. My wholesalers tell me retail dealers yesterday were on balance selling GOLD to them, which is a bit negative. Normally you would accord great weight to what market insiders -- like retail dealers -- do, but an awful lot of retail gold dealers are scared money, and don't do as well as the public.

The premium on SILVER US 90% silver coin, on the other hand, usually offers a reliable hint about silver's direction. When that premium is dropping slightly, it's neutral or negative. When the premium climbs suddenly, silver is about to turn up. Right now the "premium" is actually a discount to the silver value, and a historically large discount at 125c an ounce.

Yet the SILVER PRICE 5 day chart shows silver in an uptrend since last Friday. Today it rose another 30.1c to close Comex at 4169.9c, battering on the 4200c gate. The SILVER PRICE still must confirm its rise by closing successively higher, first over 4200c then 4400c. 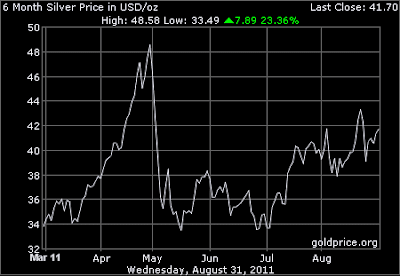 From a longer view, silver has been trending upward from an intraday low of 3230c on 14 May.

With the last two days' progress, silver must now guard support at 4100c. A close below that casts doubt on silver's intentions.

Markets will probably move sideways until after Monday. Then silver and gold could really jump.

The euro (I strive not to gloat) after gapping down yesterday closed lower today, down 0.48% to 1.4377 and nearly on its 20 dma (1.4352). In spite of all the Nice Government Men and all the genius central bankers huffing, puffing, and blowing together with all their itty-might, the euro will do well not to fall to the center of the earth. Unless it can clear 1.4550 followed quickly by 1.4700, it will visit 1.2000.

With the yen the Japanese NGM must feel like they are trying to hold a basketball underwater. Rose again today to 130.54c/Y100 (Y76.60/$). Surely they must act soon to bring it down.

We are not amused, impressed, or tempted to buy stocks. We wonder also why the yield is rising on the US 10 year Treasury note and the 30 year bond. The Fed's interest rate manipulations, after all, are applied to the Federal Funds rate, the overnight rate it charges banks for borrowing. But the Fed setteth not interest rates; in the final analysis, the MARKET setteth those rates. And when the market decides that US debt paper is too expensive,they pay less and the interest rate rises. Last I heard, rising interest rates are popularly (but wrongly) perceived as death to the stock market. BWDIK -- But What Do I Know?

Stocks -- they are the strains of the Charleston wafting through the Museum of Investment Music.

Martin Armstrong made an interesting comment in his last newsletter that made a sort of kink in my mind. From the yankee government's Greenback Act of 1862 forward, the banking cartel was allowed to count US government bonds as reserves. But bonds are -- debt! And how can debt be a reserve against cash that you owe depositors, in the same class

with gold coin? Just never had seen it quite this way before. This was an earlier form of pyramiding, where they borrowed money into existence with government debt, then pyramided on that by making it the backing for more bank credit issues. Wow. It's like sitting in a tub, then pulling yourself up into the sky by tugging on the handles. Ain't banking great?

On 31 August 1521 Cortes captured the city of Tenochtitlan, the Aztec capital, and burned it. I understand that a multitude of bleeding hearts today condemn Cortes, without ever bothering to ask how a couple of thousand Spaniards could overthrow a military empire of eleven million. Simple: they had native allies. The nations subject to the Aztecs fought with the Spanish to throw off their yoke. The yoke consisted of having to furnish thousands of human sacrifices yearly for the Aztec temples. At one temple a Spaniard counted over 100,000 skulls in a skull rack. The Aztec priests threw the victim onto an altar face up, sliced open the chest with an obsidian knife then cut out the still beating heart. Bodies were kicked down the pyramid and beheaded. Often the victims were skinned and the priests wore the skins and ate the victims.

Now me, if I had been one of those subject peoples, I would have joined with the Spaniards or anybody else short of the devil himself to get rid of the Aztecs, and I wouldn't have mourned 'em when they were gone.

© 2011, The Moneychanger. May not be republished in any form, including electronically, without our express permission.

To avoid confusion, please remember that the comments above have a very short time horizon. Always invest with the primary trend. Gold's primary trend is up, targeting at least $3,130.00; silver's primary is up targeting 16:1 gold/silver ratio or $195.66; stocks' primary trend is down, targeting Dow under 2,900 and worth only one ounce of gold; US$ or US$-denominated assets, primary trend down; real estate in a bubble, primary trend way down. Whenever I write "Stay out of stocks" readers inevitably ask, "Do you mean precious metals mining stocks, too?" No, I don't.

Be advised and warned: Do NOT use these commentaries to trade futures contracts. I don't intend them for that or write them with that outlook. I write them for long-term investors in physical metals. Take them as entertainment, but not as a timing service for futures.
Posted by Franklin Sanders at 8:23 PM