The Gold Price Has Progressed Up into its September Trading Channel Closing at $1,240.50

The gold price has progressed up into the trading channel it fell out of as September began. Crossing $1,237 resistance helped, but now gold must conquer $1,260. All this pales next to $1,296, which is the half-way point of the gold gain from 2008 to 2011. Volume yesterday, by the way, was huge.

Both silver and GOLD PRICES will move higher, soon. I would buy some. Well, I already have.

I saw a chart that really helped put things in perspective. Stocks have really gained against silver and gold since 2011, but look before that. Stocks lost about 85% of their value against gold and 90% against silver from 1999 and 2001. Earlier you bought, better off you are, but stocks' rally since 2011 has only been an ordinary reaction, and early gold and silver buyers still have strong profits.

But the latter half will be better than the first, and stocks will lose another 85% to silver and gold before the metals bull market ends.

The mess in the bond market yesterday really was a throat-crusher. Yield on the 10 year treasury fell as low as 1.86% at one point. It was the largest one-day fall in yields since Lehman Brothers bankrupted in September 2008. If that doesn’t grab your attention, it ought. And oil crashed for the second day running.

I was a little irritated yesterday, and when I am I tend to blame things on the Nice Government Men. We know they're there, but like the Yeti, we can only follow their tracks in the snow. But given that Old Bulls Die Hard, it could have been speculators thinking, "That's dropped enough! Time for me to jump in for bargains." That's possible. Yeah, sure.

I also find it tough to parse that gold has not yet caught some bid in this turmoil. Oh, sure, gold has labored away and steadily if not spectacularly climbed. But it keeps pushing against the ceiling. That makes me suspicious, although I'm sure natural causes might explain that, too. (Sure -- like the Abominable Snowman has been selling?)

Okay, Okay, I'll straighten up, I promise. Just this little added piece of data. The stock bust is propagating internationally. Add these to the casualty list, all below their last low and below their 200 DMAs and looking sick as a dog hawking up poisoned meat:

US DOLLAR INDEX has established an unarguable downtrend with lower lows and lower highs. Today it lost another 4 basis points (0.05%) to close 85.04. Whoops -- slipped beneath the 20 DMA (85.57). Nothing suggests this downtrend has turned around yet. 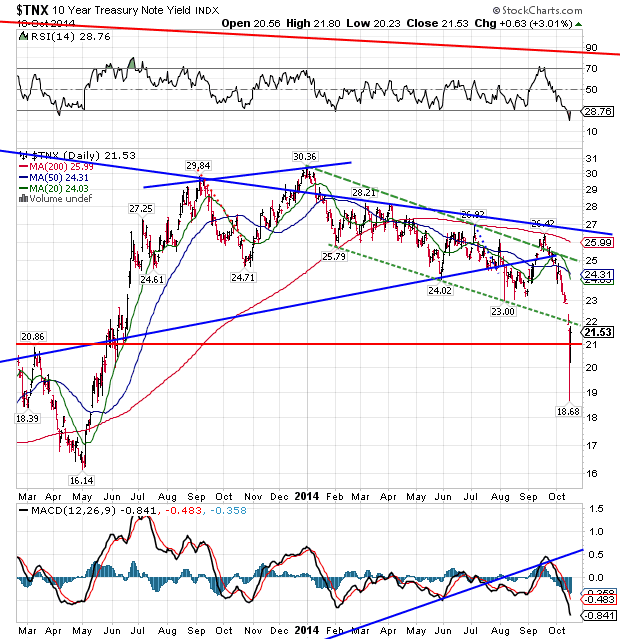 Try to get this picture. In June 2013 the 10 year treasury note yield broke out upside from a long downward trend. Since the first of 2014 the yield traded lower, and in the past few days it has cascaded down from about 2.280% to a low yesterday at 1.868%. It has wiped out all the gains of the last 16 months. Reckon Janet Yellum is grinnin' like a mule eating sawbriars, but all those speculators who have been betting on the Fed raising interest rates soon have in the last couple of days changed their minds. Chart is on the right:

And don't you all think for a minute the Fed is finished with Quantitative Easing. If stocks fall enough, they'll start printing that money so fast it'll jerk a knot in your neck. The Fed follows, it doesn't lead. And while some of the benighted world may count central bankers as celebrity rock stars, the truth is they're just a bunch of chunky, clueless academics or worn-out banking apparatchiki. That's what so frustrating about watching them, it's like being basketed to death by a WalMart greeter -- No, No! That's an insult to WalMart greeters. They would never hit anybody with a basket. 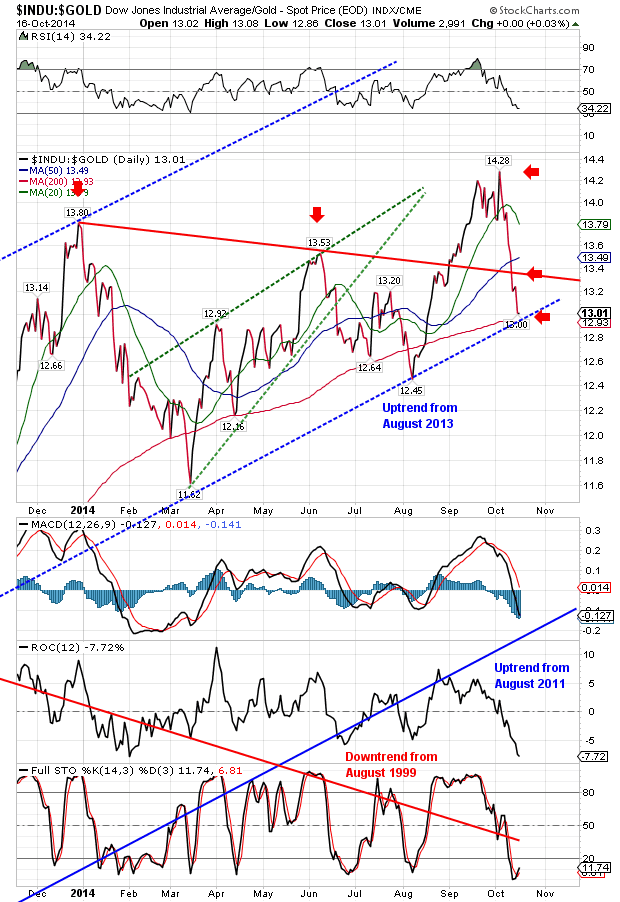 The Dow in Gold continues to plunge/plummet/nosedive. It has crashed through the top of the even-sided triangle it broke out of in September. Then it made a top at G$295.19 gold dollars (14.28 oz) on 3 October and has plunged straight down ever since, back into that triangle and today almost through the triangle. It only stopped at the lower boundary and the 200 DMA (G$267.29 or 12.93 oz). That lower boundary is also the uptrend from August 2013. You can look at the chart on the right: 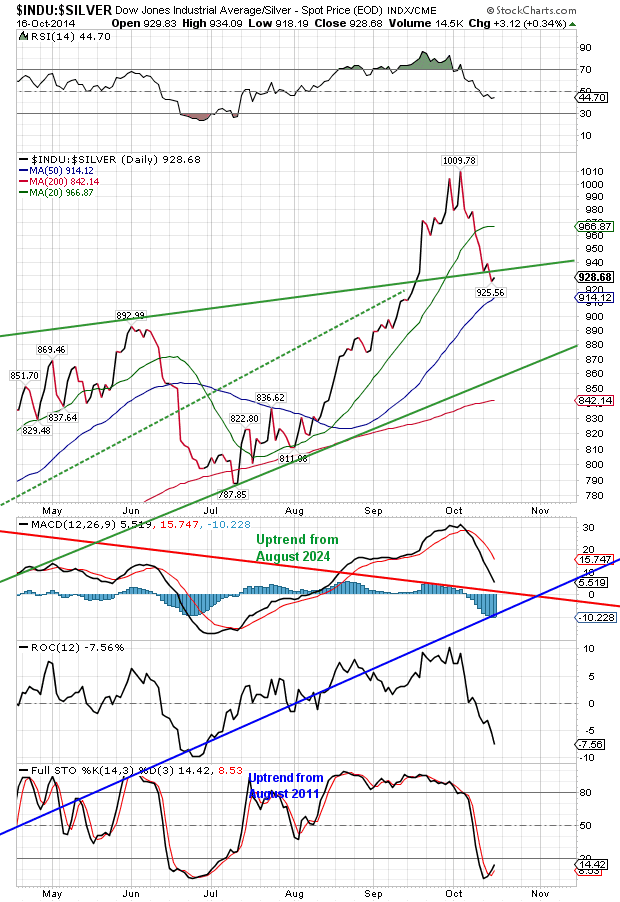 One final warning: NEVER insert a 747 Jumbo Jet up your nose.
Posted by Franklin Sanders at 8:07 PM