Face it: either silver and gold prices are making double bottoms, or they will fall a lot further.

In itself silver's weaker performance says nothing. More volatile than gold, it always falls further on the downside.

Charts don't look quite the same, either. Gold's low today was higher than the early October low, silver's was not. Today's silver close was also lower.

Technically the picture is grim. Silver and gold prices rallied off those early October lows, but without conquering many technical targets. Now they've fallen off, and it would take a lunatic like me to say, this is one of those places that you puke in your wastebasket and buy. Why? Either this is the touchback low that proves the early October bottom, or it is the breakdown that will trim another $100 off of gold and $2.00 off silver.

Oh, I won't pull the deus ex machina of Nice Government Men out of the box and blame it on them, but I do muse in the back of my mind. How would I react if stocks were tanking and an FOMC announcement didn't quite bail 'em out? If I wanted stocks to keep floating, would I want silver or gold levitating? Or would I hit weaker silver as hard as I could and sell a batch of gold, too?

Y'all are gonna think I've gone crazy as a Betsy-bug, but wait till I explain.

First, the FOMC meeting yesterday confused the stock market but enthused the US dollar index. For the life of me I can't gulp down the titles "dovish" and "hawkish" when it comes to the Fed cause th'only word that pops to my mind is "swinish" Still I struggle through to try to understand what all these clowns mean. I think by "dovish" they mean that the central bank criminals favor more inflation, by "hawkish" less.

Rather than trying to figure out the mental transmission by which Fed watchers and markets draw their conclusions, I would rather point out their actions, for buried within those actions are their conclusions.

Stocks sold off. Dollar rose. Whatever the FOMC statement (using that word to describe a Fed utterance is an insult to the English language) said, stock investors took it to mean their gravy train had derailed, and dollar investors thought it meant the dollar would become worth more. The Dow fell 0.18% (31.44 points), the S&P500 slid 0.14%. US dollar index added 83 basis points, a huge 0.74%.

Think about the whole mess around the dollar. The Fed has been pouring into the financial system as much as $85 billion a month, now suddenly all that's vamoosed. But that extra money was sloshing around the system to finance the $50 billion of new yankee government debt every month, as well as push up stocks. Now that the slosh is squeezed down to a drip, whoops, now that the trough is dry, what happens? The yankee government is GONNA get that deficit financed, and that will be sucking slosh away from stocks. Not a pretty picture, Miss Janet. 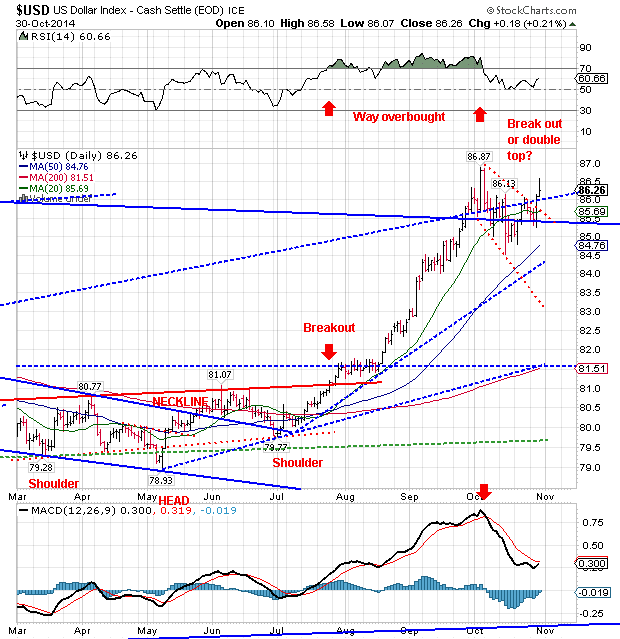 Technically the dollar index might look strong, especially with a two day breakout above the downtrend line, but step back from that chart. Chart on the right: Look at that rise from 1 July, practically straight up, then a peak in October and decline. Standard correction behavior is an A-Wave down, a B-wave up, then a C-Wave down. Often the B-wave can be stronger than a garlic milkshake, only to fool you and drop dead in a C-wave. The long preceding hyperbolic rise argues the dollar must correct for quite some time -- that is always the outcome of such spectacular rises. So perhaps the dollar is merely putting in a double top.

What makes all this so irksome is that the Nice Government Men manipulate currencies more than any other market, so technical conclusions might be precisely correct, only to be defeated by the NGM's manipulations. Hence I always tremble to say anything about currencies, not being privy to whatever secret deals they have made at the BIS over rubber chicken in their monthly meetings.

But for a moment, till disproved by a higher high in the dollar index, I am willing to work on this theory, that the US dollar index is making a double top that may even reach a leetle higher than the previous 86.87 top.

Stocks may be on their way to a double top which may include a higher high, or simply correcting on adrenalin. Either way, it mattereth not. Their next big move is rugward, for a long time.

I spoke about the US dollar index above, but didn't mention the other scrofulous parasitic blood-sucking fiat currencies, the yen and euro. Euro today broke down from an even-sided triangle, so it should drop more. The answer to the US dollar riddle I laid out above will control here. Euro lost 0.15% to close $1.2611. Yen broke its uptrend yesterday, punching through its uptrend line and plummeting hard. Ended down today 0.30% at 91.55.

One final warning: NEVER insert a 747 Jumbo Jet up your nose.
Posted by Franklin Sanders at 7:51 PM