Look for the Gold Price to Break $1,218 Tomorrow 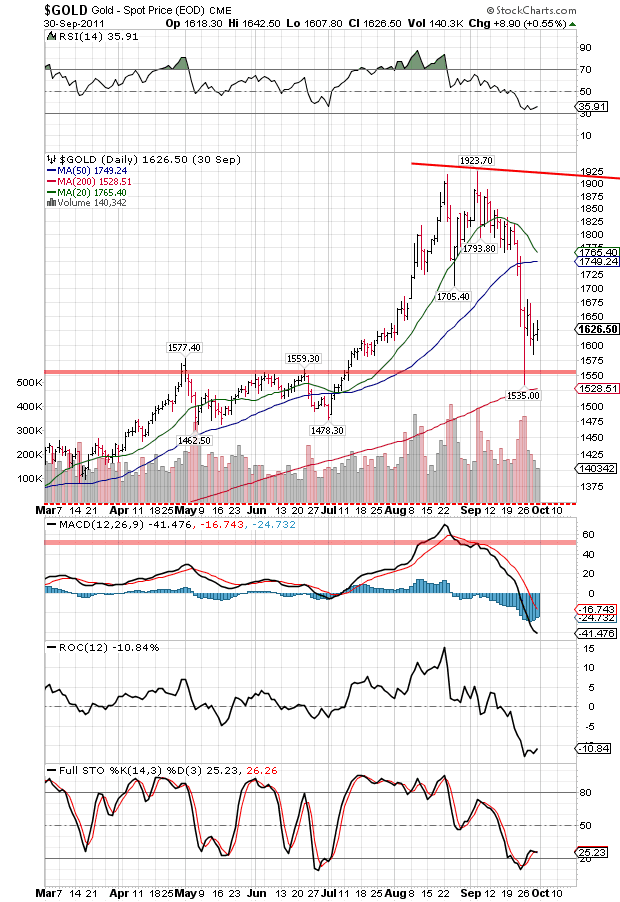 Parabolic rises never end well, and often stage a trial collapse that leaves a double top separated by a V. Purely for educational purposes I offer you the chart on the right which depicts the GOLD PRICE from March 2011 through 30 September 2011. Notice the peak on 23 August, $1,917.9, followed by a plunge to $1,705.40 (down 11%), followed by a straight up rise to $1,923.70 and the final top on 6 September. Mark ye well the parabolic rise that began about $1,560 in August then rose straight up into August. That sort of rise is always followed by collapse and tears. Now go look at the Dow or S&P500 chart from June through today.

So far gold is acting precisely as it should and silver -- blast it! -- is lagging. Look for the gold price to break $1,218 tomorrow.

Yes, I have bought both silver and gold. Higher prices coming. 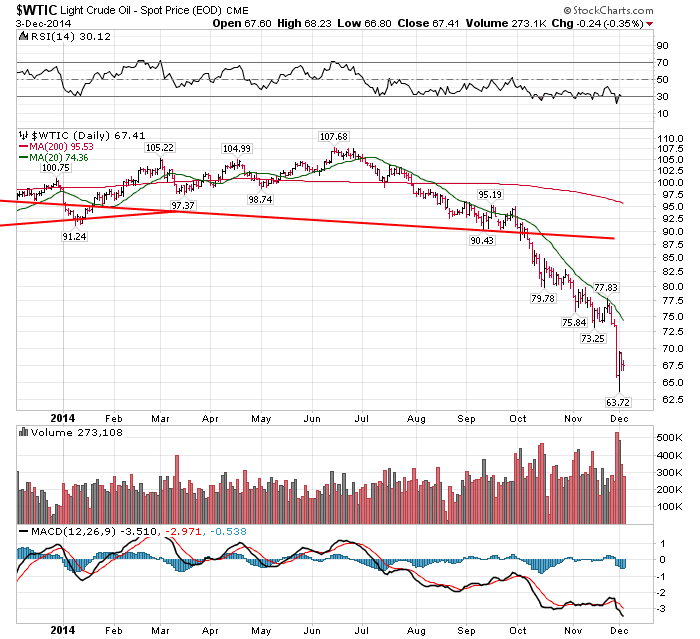 To give y'all some idea of the oil market's plunge, West Texas Intermediate Crude has dropped from $107.68 a barrel on 13 June to a low of 63.72 on 1 December, a 41% loss in less than six months. Outcome of lower prices will be pain and suffering in US shale oil production, which had been one of the few bright spots in the US economy. Whoops. Chart on the right:

In May at a Ludwig von Mises Institute Conference in Germany a former economist with the ECB and former VP of the German Bundesbank Jürgen Stark called the entire world financial system "pure fiction" and vulnerable to collapse, built on the premise of infinite money created by central banks without regard to goods and services available. Sounds about right to me.

This, too, caught my eye, quoted by John Hathaway of Tocqueville in an article called "Monetary Tectonics" from Paul Singer of Elliott Management: "Nobody can predict how long governments can get away with fake growth, fake money, fake financial stability, fake jobs, fake inflation numbers, and fake income growth. Our feeling is that confidence, especially when its unjustified, is quite a thin veneer. When confidence is lost, that loss can be severe, sudden, and simultaneous across a number of markets and sectors."

Arresting comment when you recall that the fiat money system is built on "confidence." Right, it's a "confidence game."

Today the US dollar index broke upward through the upper boundary of its trading range, rising 33 basis points to 89.07, up 0.37%. That points to a target at 93.50 or higher, unless the dollar index immediately reverses.

I'm not predicting, but the possibility occurs to me that stocks might yet make a parabolic (vertical) rise, blow out the top, and the Dow reach 20,000 next year before it collapses. Or they could stop here.

One final warning: NEVER insert a 747 Jumbo Jet up your nose.
Posted by Franklin Sanders at 6:52 PM