Silver and Gold Prices Made Huge Gains this Week With Gold Ending at $1,190.10

This looks and sounds rotten till looking closer you observe that neither closed below its 20 day moving average, so momentum remains upward. Yes, today disappointed me and looks rotten, but think back on silver's spectacular performance Monday. It was driven down to $14.15 and rose back as high as $16.81, a 19% range on the low! I don't believe I have ever seen an exhibition of strength quite like that.

All this, believe it or not, leaves an uptrend, however uninspiring. Since silver on that wild day exceeded the lowest price I could envision, $14.65, for the time being I am accepting that as the price low for the entire correction -- I mean the LAST one. But that doesn't mean silver and gold prices will take off from here, because after 3-1/2 years' damage, they have a lot of rebuilding to do.

So I think we've seen the lows, but silver and gold prices have to confirm that by throwing a leg over those levels where they broke down this fall, that is, $1,200 and $18.60.

Now that I think about it, metals' performance on Monday was the exact opposite of that crushing attack in April 2013. Mmmm.

Following appeared yesterday on Zero Hedge at http://bit.ly/12sE2L1 and I couldn't resist opening with it today. Kyle Bass said, "Buying gold is just buying a put against the idiocy of the political cycle. It's that simple."

The week ended in much higher silver and gold prices, but a disappointment today. Stocks are inching toward the cliff-edge ("Yeah, I know, Moneychanger, I've heard that before!" Well, just wait.) and the white metals, platinum and palladium lost traction. Big gainer was the US dollar, parasite of nations, vector and carrier of monetary disease.

Stocks are pushing farther and farther into never-never land. I don't think they will be easily weaned off their addiction to Quantitative Easing, since that's the only force that's been driving them the past five years. I'm just a nat'ral born durn fool from Tennessee, but I am a realist. Think about somebody addicted to meth, a housewife, say. Man, when she first gets started on meth, she has the CLEANEST house in town. She's got everything in order, and she's scurrying around with efficiency born of speed. She manages this for a while very well, but then the meth starts taking its toll. She slows down, and now she has to have it. She starts scratching herself and gets scabs all over her face, then her teeth start falling out. The collapse of this addiction is not far off.

That's about where I figure stocks are. The house is still spotless, the meals still cooked, the kids still picked up on time, but the scabs are starting to show. It won't be long now. But it looks bang-up till it crashes. 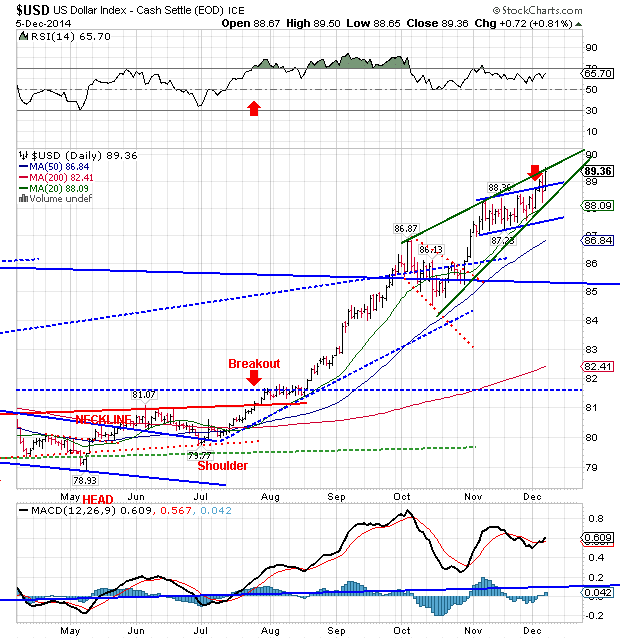 The US dollar index, hamstringer of nations, crusher of hopes, economic vampire, scourge of the globe reversed yesterdays downward course and rose 72 basis points (0.81%) to 89.36, a new high. Behold! The dollar index hath formed a rising wedge formation, which usually ends with an earthward breakdown. Closed today at the upper boundary of that wedge. You can see the chart on the right:

That wedge implies the dollar is nearing the end of its upthrust, and should soon correct downward. This doesn't say anything about the dollar's performance next year, which the chart presently forecasts as much higher.

Does a higher dollar seal silver and gold's fate? Not necessarily. They can rise right along with the dollar if stocks are tanking and wallowing.

By the way, looking at a chart for the last three days, I simply would NEVER have expected the Dollar Index to rise. Looked like it was in the middle of an unfinished correction, but the Official Lies from the Labor Department today, the (un-)jobs report, goosed the dollar index higher. Yeah, buddy! That there's rational, ain't it?

The euro yesterday appeared ready to rally, but today gave up all yesterday's game and then some, posting a new low close for the move, $1.2288, down 0.74%. As the dollar hath formed a rising edge, so hath the euro formed a falling wedge, which genrally breaks out upward. So the dollar rising/euro falling game has just about played out.

Anybody still care about the yen? It dropped 1.42% to 82.31, and Abe is in a fight for his political life. He is likely to win on 14 December, which means the yen will sink like an iron anvil pushed overboard in the South China Sea.

Y'all enjoy your weekend!

One final warning: NEVER insert a 747 Jumbo Jet up your nose.
Posted by Franklin Sanders at 7:46 PM